PURSUING THE SPIRITUAL ROOTS OF PROTEST
Merton, Berrigan, Yoder, and Muste at the
Gethsemani Abbey Peacemakers Retreat
By Gordon Oyer 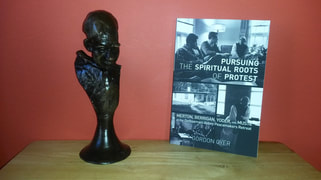 The International Thomas Merton Society granted
Pursuing the Spiritual Roots of Protest
its
2015 "Thomas Merton" award
for material published biennially "on Merton and his concerns which has brought provocative insight and fresh direction to Merton Studies." The award is nicknamed the "Louie," referencing Merton's monastic name, Father Louis.

In the fall of 1964, Trappist monk Thomas Merton prepared to host an unprecedented gathering of peace activists. “About all we have is a great need for roots,” he observed, “but to know this is already something.” His remarks anticipated their agenda—a search for spiritual roots to nurture sound motives for “protest.”

This event’s originality lay in the varied religious commitments present. Convened in an era of well-kept faith boundaries, members of Catholic (lay and clergy), mainline Protestant, historic peace church, and Unitarian traditions participated. Ages also varied, ranging from twenty-three to seventy-nine. Several among the fourteen who gathered are well known today among faith-based peace advocates: the Berrigan brothers, Jim Forrest, Tom Cornell, John Howard Yoder, A. J. Muste, and Merton himself.  During their three days together, insights and wisdom from these traditions would intersect and nourish each other.  By the time they parted, their effort had set down solid roots and modeled interreligious collaboration for peace work that would blossom in coming decades.

Here for the first time, the details of those vital discussions have been reconstructed and made accessible to again inspire and challenge followers of Christ to confront the powers and injustices of today.
Order from publisher here
ENDORSEMENTS﻿
“If Thomas Merton held a retreat in the 60’s on the spiritual roots of protest—attended by Daniel Berrigan, John Howard Yoder, A. J. Muste, and ten more great Christian peacemakers—would you want to be there? Gordon Oyer’s exhaustively researched, inspiring story of just such a legendary retreat at the Abbey of Gethsemani feels like faith on trial at the edge of the world.  Read it and see.”
—Jim Douglass
author, JFK and the Unspeakable

“A meticulously researched account of a historical event whose ramifications are as apposite today as when they were first discussed, perhaps more so.  The Prophetic voices and the witness of the retreat participants are brought to life In Oyer’s engaging narrative, echoing from the Gethsemani woods down through the ages, still struggling to be heard against the techno-babble, the inertia felt by so many, and the ever more sophisticated war machine of our world today.”
—Paul M. Pearson
Director, Thomas Merton Center

“Three powerful faith traditions . . . converged for the first time at that legendary 1964 retreat hosted by Merton. . . . Any of us who seek today to hear public witness to the gospel, justice and political imagination are truly ‘children’ of that conversation a half century ago. . . . We are walking in their footsteps. Oyer has gifted us with a magnificent chronicle of the contemporary spiritual roots of protest.”
—Ched Myers
Bartimaeus Cooperative Ministries

"I'm re-reading Gordon Oyer's study of the "spiritual roots of protest" retreat that Merton hosted in 1964 and find myself more impressed than ever by the author's achievement in making sense of the various papers and notes made by participants (I was fortunate to be one of them), weaving them together so skillfully, tracking down obscure material that Merton and others referred to, and putting it all in context. Thanks are due for the immense amount of time, care and craftsmanship that went into the project."
--Jim Forest
Merton biographer, friend,
and retreat participant

Reviews of
Pursuing the Spiritual Roots of Protest